Greetings from the states. Everything has been a bit hectic since I arrived as I have had to get a lot of administrative things out the way so therefore first a sign of life now.

I will try and make an update from time to time here when something interesting has happened. Meaning probably more here in the start than along the way. I will spice it up with some pictures from my Picasa Albums. Let me know if you have trouble accessing them from the links which I make available both in the blog, and probably in the side of this blog as a link when I get it working. I should already now excuse for the fact that all is in English, but I assume almost all of you can handle it in English, and if you need it in another language you are always free to translate it. Managed to put in a small automatic translater to the right, click the flag and there you go (no promises for translating quality though which seems to be rather awful). For those that wish to get an email each time I update the blog send me an email and I will add you to a list I spam every time. I will try and see if I can find a way to do it via the blog but at least till then that is how I will do it.

So I left Denmark on October 30th with my life in 2 suitcases and some seriously overweight carry-on luggage. I had to pay extra for the 2nd suitcase, but it was worth it to get at least some of the essentials with me. Arriving in Raleigh/Durham airport, North Carolina, I was picked up by my old flat mate Trey. We also picked up the number 1 essential tool in the US, my first car (well a rental, and I had a Saab last time but…). I wanted to get a big fat gas guzzling Ford, but Trey asked me if I wasn’t an Environmental 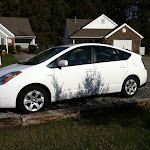 Engineer, so I suckered up and took a Toyota Prius which I could also choose. Which actually turned out quite well as it is giving a very good mileage, at the same point I learned that it lost a lot of acceleration from that eco-hippie-friendliness. Since it was not really an option to keep this rental while here, I quickly went hunting for a real car. Since I suck in haggling about prices I decided to go to a place called carmax since you can’t haggle there. Perfect for me.  I tried out a couple of cars in my 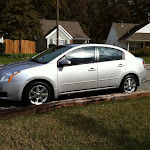 pricerange (decent but not too expensive), not sure if it was rude saying I didn’t want an American car (except for Fords) to the salesman but I did so, and we therefore found a decent Asian choice. So now I drive a silvergray Nissan Sentra from 2007, which is actually a really nice ride. Only get like 25-30 mpg, which is still quite good. Ohh and off note, the 25-30 min drive to campus every day already pisses me off, I am sooo not meant for this daily car commute.

That said and returning to day 1, Trey took me to the place where I am staying. It is a house in Durham which funny enough is about 25-30 mins from Raleigh where I work. He used to share the house with another guy, and I could take over his lease. Seems like the guy had sort of gone into hermit/bachelor mode the 3-4 months where Trey had not lived there. At least the kitchen looked like the day after a rather good party (just needed the after-cleaning part), and the living room looked like he had detonated a bomb spreading shrapnel of clothes and cardboard boxes. The rooms where I stay are nice though, got a bedroom, own bathroom and a walk-in-closet. So that part is nice. Ended up cleaning up the kitchen as I realize that my sanitation requirements have increased quite a lot since my dorm days. So the kitchen is actually quite nice now, I haven’t bothered with the living room as I just stick to my room. The guy I share the room with is a friendly guy named Taylor who works in a laboratory nearby. He spends most of his time by his computer, but at least there is someone to talk to from time to time which is actually quite nice. I do though want to move closer to Raleigh after New Year as I can’t be arsed with the daily commute, and it looks like Trey will return to Raleigh at that time as well, so we will probably find something to share together if that happens. No pics of the house yet, but will try to remedy that.

I am starting to get into the daily life at NCSU where I will spend the next couple of years.

I moved into my office this week, last week it was still shut off as someone had seen bedbugs in there (væggelus in Danish). Not that I have seen anyone sleeping in there…. Seems like someone had an infestation at home and they shut of the office just to be sure they weren’t spreading it to here. But since no one had seen any in some time, they found it to be safe. So far I have not seen any of my new pets, so I am starting to believe in it. The office is typical Dilbert principle style with lots of small office cubicles. There is about 8 cubicles or so. I am in the deluxe part as I have two windows in a closed of  end part of the room which I will share with a visiting ass. professor. So that is really nice, in comparison with all the grad students who have cubicles with no direct sunlight….    Work climate is a bit different from DTU, there is 3 professors in our group and 1 PhD student and 2 graduate students, so it is quite a difference from the group at DTU where we could field around 20 people when we gathered all in. Furthermore people don’t seem to socialize as much, and there is no common lunchroom. So this will definently take some time to get used to, but I have started to find some people to go out and have lunch with, if it is not devoured at the office desk. Guess I could work on trying to introduce some Danish lunch culture over time. I am slowly starting to get into the research work as well, my first week was mainly a lot of administrative work. The project is slightly similar to my DTU work as they are building a waste process model but it also has an optimization mode which is different from DTU. Other differences as well, which I won’t geek you out with now. My task in the start will mainly be to work with the integration of a landfill module where they have an old design, and also gather input data for this landfill module as well as a collection module. This entails contacting and meeting with people from the waste management sector which I really look forward to, as it will give me a none academic look on the field. 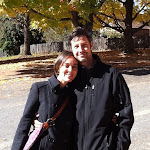 This weekend I went to Winston-Salem to visit Trey who lives there. Spent some time with him, going to Mellow Mushroom for some good pizza, touring some of the old city and meeting up with his girlfriend and his sister as well. I will spend Thanksgiving with his family so its nice as the holiday is a big deal here, and since we Danes don’t celebrate it, its a good way to get a view of this part of American culture. So in two weeks I will head down to an area near Wilmington where it will be held.

Else I do not think I have much news for now, probably more will come as I settle more in here. As mentioned I am posting some picture on my picasa page, I will link some of them in the blog. But if interested you can go to my albums to see more of them. You can find it here. If there is something you want to know drop a line here and I will try to take it up in the next part from this side of the pond.

This entry was posted in General. Bookmark the permalink.