“”Weather was perfect for a hike yesterday so went to the nearby William B. Umstead State Park. 21 Celsius in mid November is something I really fast have gotten used to

But it does make me afraid of the heat during the summer, but its perfect for this time of year. 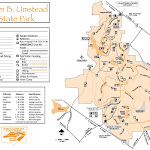 The park is only about 10 miles from where I live so it is very accessible. The park is about  5579 acres so still quite big and definitely a place I will come back to. I started out from the southwestern parking place, from where I followed the short “Inspirational Trail” that took me down to where the 6 mile “Company Trail” started. The first bit was very crowded so I was glad when I got to the split where the other trail started and I could see most people stopped there. One thing which I already have bitten mark in, is how well kept the areas are. For the full walk I did not see one piece of trash dropped, where in any similar setting in Europe this would be impossible. A part of the reason is probably that littering in general is fined heavily here (something we could learn from in Europe), but this can not be the full reason, and I also think the American public is just better educated in how important it is to leave the nature clean, so the next hiker can enjoy it as well.

Along the streams I saw a couple of the signs as show to the left. Sadly the creeks here are 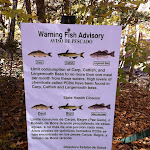 surrounded by  industrial areas, and pollution albeit not obvious to the eye is sadly still a part of it. I haven’t seen these signs in Denmark, but I would think we would have similar streams with this problem. At least we could probably put a signs at the beach by the Baltic Sea…

That said the area was very nice. It was a trail following some of the watery creeks and else mainly going through deciduous forest. I put some pictures on the Picasa site. The walk did make me realize I need a better camera since my compact is really not made for taking nice nature shots, so as I am getting a nice slump of money back from saved up Danish vacation, some of it will go to get me a new Canon EOS Rebel T1i (500D). So hopefully my December pictures will start to look a lot better. The shots of the creeks were not worth saving due to this. I did not see much wildlife, but I did see one large deer (type still not figured out I have to admit) and else a few squirrels. Due to the heat most of the leafs are still on the trees so the ground was not covered in a coloured leaf coverage yet (only browns from last year), so I look forward to see this. But I did get a few shots of the colors on the trees. 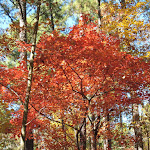 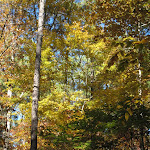 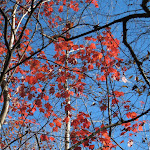 This entry was posted in Hikes. Bookmark the permalink.